WASHINGTON, D.C., April 25, 2017 – GEICO recognized six distinguished members of the U.S. military for their significant contributions to their communities at GEICO'S annual Military Service Awards ceremony in Washington D.C. last night. The award honors members of each branch of the military for volunteering their time and talents to address important health and safety issues.

During the event, GEICO Chairman Tony Nicely noted, "GEICO has been dedicated to supporting the men and women serving our country since opening our doors in 1936. The GEICO Military Service Award was created to give special recognition to service members who improve the lives of those in their military and civilian communities. We are proud to continue this tradition for 29 years." 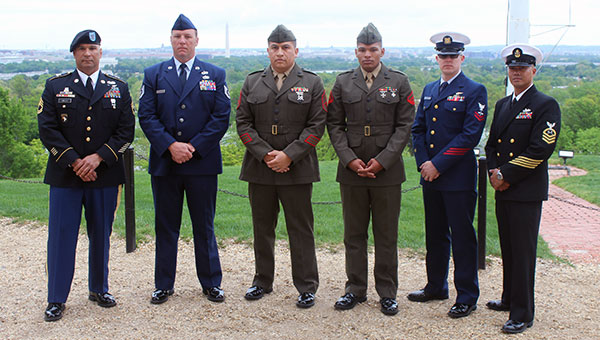 The six members of the military GEICO honored yesterday with the 2016 GEICO Military Service Awards for their outstanding service to their military and civilian communities are:

Sergeant First Class (SFC) Julio Mella, assigned to the U.S. Army Garrison at Fort Campbell, Ky., as the senior administrative noncommissioned officer, was cited for his work in fire safety and fire prevention.

SFC Mella has been a volunteer firefighter and emergency medical technician for Oak Grove, Ky., since 2008. He has responded to more than 200 emergencies in the last two years. Additionally, he volunteers as a reserve deputy sheriff for Montgomery County, Tenn.

In 2011, SFC Mella was awarded the Community Service Ribbon for his service to the Oak Grove, Ky., community, and in 2012 he was awarded the Upstanding Volunteer Service Medal for volunteering more than 4,000 hours as a volunteer firefighter and EMT. He also volunteers as a mentor for high school students with the tnAchieves organization.

When nominated, Lance Corporal (LCpl) Lawrence Lucy was the supply clerk for Headquarters and Service Battalion, Marine Corps Base Quantico, Quantico, Va. He is recognized for his work in fire safety and fire prevention.
LCpl Lucy gave his free time to ensure the safety and well-being of the military and civilian communities aboard and near Marine Corps Base Quantico. His volunteer work with the Dumfries-Triangle Volunteer Fire Department exceeded more than 400 hours in the past year.

During those volunteer hours he provided timely, effective and professional services at the scenes of 14 vehicle accidents, 27 injury or sickness calls, six reported gas leaks and three fires. Lucy is certified in infectious disease control, cardiopulmonary resuscitation, first aid, use of the automated external defibrillator, and in Federal Emergency Management Agency training.

Chief Petty Officer (CPO) Cyprus V. Abundo is the safety department leading chief petty officer on the USS FRANK CABLE (AS40), Agana, Guam. He is cited for his work in fire safety and fire prevention.
CPO Abundo is damage control coordinator for a premier afloat repair facility operating in the Fifth and Seventh Fleet Areas of Responsibility. He exceeded all areas of fire safety and fire prevention requirements, including an unprecedented 2,965 in-theater repairs to forward-deployed submarines while maintaining safe and healthy working conditions for 1,150 Navy and Military Sealift Command personnel.

When nominated for the GEICO service award, Technical Sergeant (TSgt) Lee M. Elam was assigned as the occupational safety technician at the 325th Fighter Wing, Tyndall Air Force Base, Fla. TSgt Elam oversaw the base occupational safety program, ensuring safety for 10,000 personnel and $2.8 billion in facilities. Additionally he provided commanders' safety consultations supporting the Air Force's largest F-22 wing, with 55 aircraft valued at $10.45 billion. His efforts contributed significantly to the 325th Fighter Wing's outstanding record of zero class A or B mishaps in the last four years. He is cited for his work in traffic safety and accident prevention.

TSgt Elam was directly responsible for the base Motorcycle Safety and Mishap Investigation programs, providing motorcycle safety for more than 400 riders and investigating, identifying and correcting mishap root causes. TSgt Elam's work and leadership in motorcycle safety led to his program being recognized as the best program in Air Combat Command.

In his off-duty time, Elam served as the president of the Green Knights Military Motorcycle Club. He led the base Wounded Warrior retreat motorcycle escort program, where he planned and managed activities for over 270 riders. His efforts contributed to the dignified recognition of 180 Wounded Warrior heroes.

Petty Officer Farrar identified critical gaps in the local Aircraft Rescue and Firefighting (ARFF) program, including deficiencies in the number of rescue personnel, the need for annual live-fire and monthly drills, poorly maintained exposure suits and self-contained breathing apparatuses, and some fire safety response vehicles were beyond their service life.

GySgt Montoya is the platoon sergeant for the Motor Transport, Utilities and Engineering Platoon of Headquarters Battery. According to his Battery Commander, GySgt Montoya "is one of the strongest staff noncommissioned officers in the battery." Montoya serves as the DWI enforcement officer for the city of Lewisville, Texas, where he has been a police officer since 2008. He currently holds an Intermediate and an Advanced Police Officer certification in the state of Texas. The Mothers Against Drunk Driving organization recognized GySgt Montoya as the Lewisville Police Officer of the Year in both 2011 and 2012 while he was serving as a patrol officer.

In November 2013, he was selected to become a DWI enforcement/Traffic Officer for the city police force. His proactive DWI enforcement methods have resulted in 725 traffic enforcement stops and the issuing of 280 warnings and 445 citations in just the last three years alone. His expertise has resulted in him training senior police officers in recertification and in training new recruits in DWI detection and DWI enforcement. In 2012, 2013, 2014 and 2015 GySgt Montoya was recognized by LEADRS (Law Enforcement Advanced DUI/DWI Reporting System) as being in the top 10 of all Texas police officers for his commitment to keeping drunk drivers off Texas streets. He was additionally recognized as the number one police officer in the state by that organization during 2014. GySgt Montoya also volunteers his time to the community as an assistant youth soccer coach.

GEICO (Government Employees Insurance Company), the second-largest auto insurer in the U.S., was founded in 1936 and insures more than 28 million vehicles in all 50 states and the District of Columbia. A member of the Berkshire Hathaway family of companies, GEICO employs more than 43,000 associates countrywide. GEICO constantly strives to make lives better by protecting people against unexpected events while saving them money and providing an outstanding customer experience. Along with personal auto insurance, commercial auto and personal umbrella coverages are also available. Homeowners, renters, condo, flood, identity theft, term life, and more coverages are written through non-affiliated insurance companies and are secured through the GEICO Insurance Agency, Inc. Visit geico.com for a quote or to learn more.