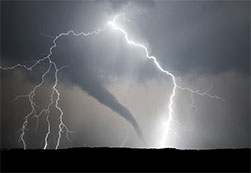 While most homeowner and auto policies cover damages caused by natural disasters, you can prepare ahead of time to help reduce losses. According to the Insurance Information Institute (III), from 1993 to 2012, hurricanes and tropical storms accounted for 40% of total catastrophe losses, followed by tornado losses (36%), winter storms (7%), wind/hail/flood (4%) and wildfires (1.7%).

Based on averages, the National Oceanic and Atmospheric Administration (NOAA) predicts that a normal hurricane season from June to November has 12 named storms, six hurricanes and three major hurricanes. Hurricane quick facts:

Each year, the U.S. experiences approximately 1,000 tornadoes, more than any other country in the world. With deadly, strong winds and storms, tornadoes cause billions of dollars in losses. Want some more tornado facts?

While most hail storms occur during the summer months from May through July, hail causes up to $1 billion dollars of damage each year, according to NOAA. Hail can cause serious damage to your vehicle and your home's roof no matter the size of the hail. Below are some surprising facts about hail from III:

Hail often comes with severe thunderstorms and tornadoes, so don't risk your safety by going outside to move your car or property to safety once the hail has started. Be prepared:

Wildfires are becoming increasingly common across many parts of the country. According to the National Interagency Fire Center, there were 41,790 wildfires in the United States from January 1 to October 10, 2014, which burned approximately 3.1 million acres. As one of the most destructive forces of nature, here are a few things to know about wildfire:

While wildfires only account for a small portion of catastrophe losses, the damage can be devastating. Be prepared: